Let the blessing speaks for itself 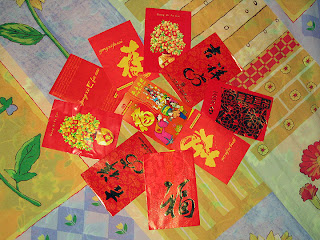 It’s the time of the year where I brace my face, anchor it with shields and ungracefully tear my dignity apart to greet my elder relatives “Gong Xi Fa Cai!”. Why do I proclaim my dignity that low ? Well, it’s merely to maintain the tradition of receiving red packets, known as “ang pau“. These aren’t just red packets. Its packets filled with money. Some generous ringgit I must say received by some lucky ones while there are still a handful receiving the miserable Rm2 in a gigantic red packet.

The tradition of giving out red packets in the Chinese society indicates a blessing from the elders to the young ones. It is also a sign of good fortune, wealth, health and prosperity. Only the married ones are allowed to give out such blessings to the younger generation. As for me, I take this opportunity to weigh my standing position in my companion’s parents. This is a very simple test; works well for the unmarried Chinese couple. A little secret, a devious experiment on my ang pau collection. I will reveal it all now.

If you are constantly worried about what your future in-laws think of you, fret, no less. No more trivial question to your better half “Do you think your parents like me ?”
You can pretty much gauge your value in the opposing family with the ang pau money received from them. If you received less money than the blessing received from his/her own parents; you are deem still an outsider in the family. On the other hand, if you have received more or the same amount as your companion, my hearty congratulations to you; you are part of the family.
As ridicule as this test may seem, I believe this simple test has its significance. People say, “action speaks louder than words”. In this case in point, I say “money speaks louder than words”.
Wanna know who’s the “boss” of the family you need to kiss ass with ? Well, stay tune for my next crackling “wisdom”.

That’s Why You Have To Make It