What I Really Won – A Happy Moment 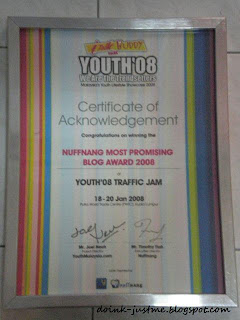 I came home that Saturday evening, clutching my victory by hand. Mother saw me and without question started her nagging session, “You bought another photo frame home? We have enough photos hanging around the house.” I turned the plaque and explained to her, “I won this.” She acknowledged me with a blank look. Clueless on the existence of my blog, I just told her “It’s computer stuff, like how I won the free meal in TGIF“. The word free excites her. Her eyes beamed and sparkled. “So, how much did you win ?” I could almost see the money sign flashing on her forehead as she pokes her head closer to me. “Nothing, just this” I heard myself said as I held the metal piece high up, even though the fact is, mother is illiterate. The words in the frame is meaningless to her. If there was a prize for a Kodak moment, this will be it. The dumbfounded look on my mother’s facial expression, a definite first prize winner.

To my disappointment, the exact same words echoed on the phone when I shared the happy news to some of my friends. “What did you win?” The next question that came after an oblivious answer of “A plaque” was “What other awards were there?” I answered the named awards and later revealed the winning prizes. Indeed, the other winning made me looked pathetic. I felt so small holding the phone and the reply on the other end, “Did you actually win anything, besides that useless frame?” My heart sank so deep, I could see it vanish. I found myself looking inside to find out what it was and in the moment of turning within there was what I can best describe as an explosion of silence. My body was alive and pulsating with energy but the mind was totally silent. Then, a flashback came to me. 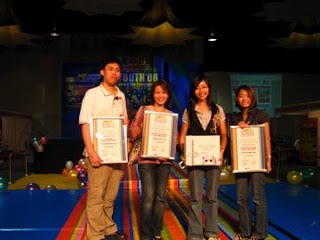 “doink-justme” the microphone announced my blog name. Everything was blurry, I looked up and there he was, the co-founder of Nuffnang standing on the stage with his friendly and warm smile inviting me onto the stage. I stumbled finding my way around the crowd of bloggers. I took my steps carefully up the stage. Moments as such, I fear tripping on the footsteps and caused an utter embarrassment to myself. I stood next to the Nuffnang MC. He was much taller than I am. The question came, “Did you expect to win?” His eyes looked down into mine and mine looked helplessly up into his. “No” I answered. He dipped again with another question, “Do you have anything to say?” My thoughts wandered away from that question. There was another explosion inside after which my mouth said “No”. The word came from an unknown place.

“Hello, hello, you still there?” I woke up from the flashback. “Yes, I’m here. I won more than the plaque.” That’s all I said ending the call.

When the first post started in Oct 2006, I wanted to bury myself. One year down the road, an advertising company noticed my presence and defended my pride. I can’t write so I was told and my blog will never sustain pass one year.

A name soon to be forgotten, Nuffnang Most Promising Blog Award 2008. But that Happy Moment will forever be mine.

My Buddies in Bed

When is your turn ?