A Glipse to the Dark Side Part 1 of 3 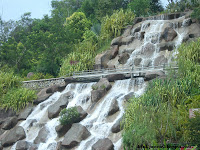 It was a rather cloudy day on 31st Dec 2006. As my year ends with thoughtful sms messages on my mobile, I had again made another lasting memory for me good self.
The journey to Malacca was about 2.5 hours. I was greeted by a man made waterfall, I started snapping pictures. Then, I realised it’s nothing to shout about, just a plain artificial rocks with some luscious greens around the stones. The waterfall was located right beside a traffic light. I suppose the red lights was such a long wait, the government had to build a scenic sight to entertain the tourist while waiting. 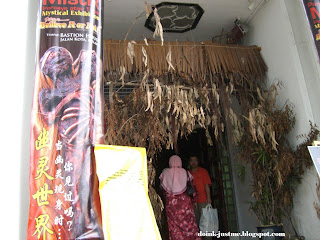 Upon arriving the township, I saw many banners on the street lights. “Mystical Exhibition” the banner displayed. I was very intrigued with its visual depiction.

“Better not go to look at such things. It’s bad omen” said the elderly man in the front seat. I raised an eyebrow and glanced a mischievous look at my companion. “Yea, it’s end of the year. Should not go. Bad ..bad ..” agreed by the elderly man’s wife, seated in front of me. My companion and I exchanged our mutual evil grin.
Soon after we sorta part ways with the elderly, my companion and I eagerly find our ways to the Bastion House. We arrived to the mystical entrance. Adorn with dried leaves and dead plants, not very inviting. Nevertheless we purchased the RM8 ticket and went in. After all, it’s only RM8.
I caution my companion not to take any photos inside the exhibition, as I was afraid of catching the “evil” back home. The exhibition includes showcase of preserved strange beings. Evil and enchanted beings, so it seems. “Paradise birds” famously known by the Chinese society, a bird that lives in heaven. Once descended to earth, the bird will die in the mortal land. The exhibition had two of such birds.
The highlight of the exhibition was several “toyol” (evil gins). The banner clearly shows a picture of it. I could feel my goosebumps as I walk past the display window and boxes. Although, there wasn’t much to read on the display, I think the sight tells it all – evil. 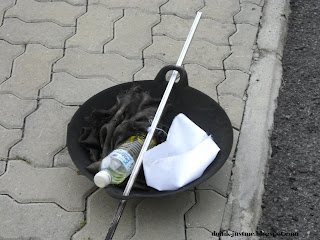 After the touring, my companion and I walked out nearing the exit. Suddenly, an announcement came in, “Ladies and gentlemen, the exhibition will perform a live show at 6pm. Please gather at the back of the Bastion House” the deep voiced man commentated.

We proceeded to the back and stood waiting patiently for the “master” to come. The first act was “Burning of the Pontianak (Vampire) clothing”. The “master” arrived with a wok, petrol and some clothing. Then, my companion did the most shocking thing, he touched the clothing! I shrieked. “Oh, no, we are cursed !” I thought to myself. Since I’m cursed, I might as well, walk down dooms land. I took out my camera and started taking pictures. I share the curse with you all .. There’s no return, I warn you if you watch the videos.

The action started with the white clothe. An ordinary white cotton clothe. The “master” paraded the piece to his spectators and allowed them to touch it (I’m not cursed after all, if everyone is touching it). He then poured the petrol.

Sets the fire on the cotton.

He then prepares the Pontianak (Vampire) clothing with the same regime.

The burning begins. Evidently, the piece of evil clothing won’t burn to ashes, unlike the normal clothing. The crowd was amazed. However, I wasn’t quite attuned to the “trick”. I’m sure the clothing must have been soaked with some kind of chemical mixture that prevented the combustion process.

Anyone knows of the such chemical mixture ?

PS: Stay tune for part 2 and 3 in my upcoming posts.

A Girl and A Guy