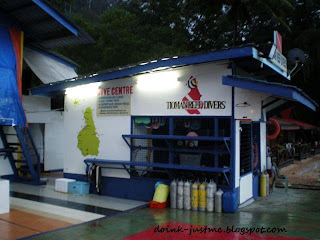 I rejoiced in sheer pleasure when I arrived at the Tioman Reef Divers Centre, Tioman island. “It’s far too early for the diving season” one frequent diver may respond if I said, “I’m going diving end February.” It was so long ago I almost forgot how the underwater world looks like. If I recall correctly, approximately 730 days was my last visit to the deep sea down under. It took me 5 minutes to decide when the opportunity came knocking on my door.

The 5 hours drive up north was somewhat intriguing. I stayed awake most of the drive, which is rare for a full grown piggy. I took noticed every fence that guarded the orchard and paddy field. The wires that kept the crops safe gave me a new perspective, one that never dawn on me before. What was it ? There are many ways to build a fence !

There was also something remarkable about the journey in the car, a moment I would best described it as serenity. The hours didn’t feel like inching minutes. Unfortunately, I couldn’t say the same on the experience sitting in the ferry. The choppy motion was a turmoil for my stomach. I didn’t feel good at all, although the ride was by no means the first experience I’ve had. Endurance was the word that held my digestive substance in place. An agonizing 4 hours, my butt was glued to the hard seat. There was no other choice, I couldn’t jump off the ferry. I could swim instead. The thought did linger on my mind. The waiting continued after arriving at the jetty in the island. My lack of will to stay focus had me loitering around the cemented blocks of buildings near the jetty in Tekek village. Finally, the van arrived and my two car mates and I hopped on to it with bursting anticipation. 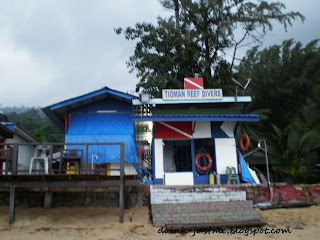 Arriving at Babura Seaview resort cafeteria, we were greeted by the organizer. Before me, stood a rather round shape man, half naked with his wet suit pulled down to his tummy, exposing his well tanned chest. His radiant smile spread wide across his face as he ran through the itinerary for the day. We had an hour to get ready, so we gobbled down lunch as fast as we could.

I changed to my bikini soon after and I was very eager to get into my diving suit. The air was chilly, I could feel my goosebumps as I slipped on the rented costume. It wasn’t an easy task, putting on the rubbery clothing, the struggle took me a good 10 minutes. I never took much noticed of my own body until I stood a torment between the rubber and my skin. I’d noticed how my thunder thighs defined my flawlessly smooth skin. I’d noticed that my calves has grown more muscular from all the hiking. I knew this, all the changes to the shape of my body was a good sign. My moment was interrupted when the other divers came a close distant to get ready. I must have looked rather silly gazing at my own legs, as if it was the first time I saw them. 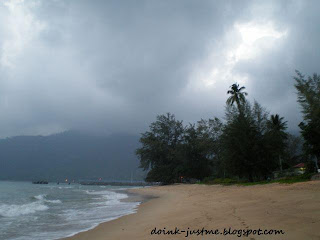 Carrying a pair of fins and the diving mask, the group walked on the beach to the nearby jetty, to the dive boat. Walking on the beach, kicking the sand, I wondered at the quietitude and tranquility of the sea. Such peaceful moment, the wind blew against my face, I could taste the soft sweet air. 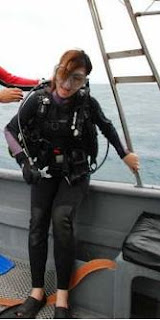 The first dive site was the Marine Park. Carrying the BCD and other equipments in place, my buddy diver did the proper 3 step check. I was very anxious. His deep dark brown eyes and soothing voice calmed me. I stood up and was ready. I flipped clumsily to the edge of the dive boat, breathless, my tongue was sticking out, gasping for air. I felt like a dog. In I went doing a backward entry point into the salted water. 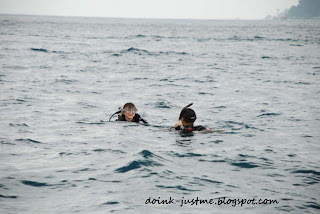 Adjusting my buoyancy, I felt the weight lighter and I was floating. The rest of the divers splashed in effortlessly. The moment came, everyone started descending. Everyone, except me. I took a deep, long breath and told myself, “Go down, you remember how to go down”. Steadily, I started sinking in. My head was immersed into the water and the ray of sunlight slowly start to get blurry. I was breathing tank of oxygen, clean and unpolluted.

Visibility was poor. I saw nothing. My vision was only on my buddy diver. I stayed close to him. He constantly looked at his dive computer and signaled me to go slow. We swam a short distance and arrived at some artificial reef. 5 poles rooted firmly on the ground. Corals were sighted growing on the cemented sticks. The picture was getting much clearer, I could see some fishes. A big, fat Gamuda fish swam close to me and gave me a fright.

45 minutes went by and the group ascended back to the boat. As the boat steered nearer to the beach, the faint cries of the fishermen from the village sounded clearly above the noise of the waves which were lapping gently on the shore. We stepped out of the boat and I encountered a new experience with the shells …

A Glipse to the Dark Side Part 1 of 3

How to build a bear