The girls arrived around mid day to my humble home. They were greeted with the blossom tree as they make their way into the little cozy hut of mine. “Wow, that’s beautiful !” the astounded one said. Buzzing around like bees, they gathered around the corner, admiring the stalks in awe. Slowly, they examined the man-made flowers. “That’s really creative, reusing mandarin oranges wrappers,” she said battering her eyes at me. Torn between taking the credit and honesty, I chose the latter, although I can imagine myself gloating in pride if indeed I took the standing flattery. 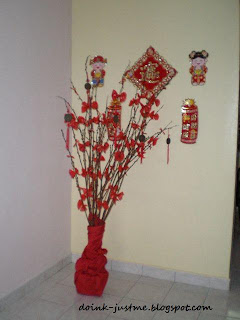 “I didn’t do this. My mother and sister-in-law did it. The mothers in action.” a glee appeared as I clarified.

I came home one late night and found the blossom tree erected, the “well wishes banners” up on the wall and the red tang lung hung at the entrance of the house. The “gong xi, gong xi” ambiance was created with merely simple decorations.

Chinese New Year will never be the same without mothers. Perhaps yet another “mushy” post, but I like to salute all mothers around the world, for making the special touch during the festive season.

Auction Yourself For Charity

The Meaning of A Dollar