The first time always hurts. So, I was warned but little did I expect the pain would be so intense. It all started with an innocent question, “So, I hear you do mountain biking?” I prompted an old acquaintance. A simple yes landed me in Forest Research Institute Malaysia (FRIM) on the crisp morning of 25th November 2007.

Arriving at the car park, I was bursting in excitement. Trying to conceal my anticipation, I remained a composed posture but the truth was, I was dying to climb up on the two wheels. Delicately but carefully, the familiar face took the wheels off the car roof, I watched in glee. Once the wheels were on, I climbed up on my first mountain bike. It was horrible. The seat was too high for me. I struggled maintaining a balance with the bike. I was like a clown walking on stilts. My hands stretched far and my body plunged into a cat bend, I managed to cycle nevertheless. Clearly I was in discomfort, my old friend came to my rescue. He took his equipment out, a stick that looked somewhat like a pliers or screw. Being an oblivious woman with handy tools, I looked at the man meddling with his tools. He pulled the seat out and measured, sternly he said “that’s the lowest the seat post can do”. With that I erupted a bold reply “ I told you I was short ! I always have trouble with the seat, even with my own bike at home.I even gave you my height measurements beforehand. Can you please do something about it ” I sulked in distress. Standing next to him was the owner of the loaned bike, “oh, this is a feisty one” he blurted out. What a first impression I made to a new friend.

I had no choice but to suck it up with the tormented posture. Either that, or I don’t ride at all. I didn’t wake up at 5 am in the morning for nothing, I thought to myself. I rode a few rounds, playing with the gears. I fell down a few times, as I wasn’t braking correctly. My feet was dangling in mid air, far too high for me to comfortably stop the wheels. Putting on his expert skilled hat, my old friend showed me how to shift the bike so I can make room for my feet to land correctly. I swing my legs around the seat post and my thighs hit the seat, again the seat was too high for me. By then, other bikers were arriving at the car park. I was turning red. I stood by the corner, hiding and practising my leg swing. “…. can we swap your saddle “ a distant voice spoke. He came back with another saddle. He took the saddle off and slide it back into the frame. “Try now” he uttered. I climbed up and it was perfect ! I smiled gratefully. He walked off, to return the long saddle to the other kind biker and thanked him. I watched him from behind, standing tall and proud. He saved a damsel in distress or he was just glad that the new saddle shut my whining, the thought lingered on my mind.

I was very fortunate to have a quick crash course on safety biking. “Always remember, whatever happens, throw the bike away, save yourself. Your life is more valuable than the bike. Bike can always buy new one” the owner of the loaned bike assured me. Somehow, I wasn’t convinced. With doubt, I asked “How much is the bike?” My jaw dropped when I heard the reply, “About 10K”. My knees went weak, I almost fell off the bike. My expression gave in, I was sick worried to my gut. “Really, its just a metal piece. The bike will survive but you won’t if you fall with the bike on top of you.” he comforted me. I shrugged and said nothing.

The anticipation was building, riding on a 10K worth of solid frame. The moment came and the crowd gathered for an announcement. Making the statement probably the umptiempth time, the sweeper announced, “this is gonna be a short and simple ride. We ride up steroid ..” That word rang out loud, I was terrified but I embraced myself for an adventure. An adventure I never quite understand when I watched those extreme bikers hiked up the hills shown on AXN. What insanity drove them to take such risky sport? Here I am, joining the “insane” activity I once frowned upon.

We started cycling, roughly in a group of 10. We cycled past the streets of floral shops. The morning flowers in pots were glowing. The beauty of the petals were enchanting, staying in focus on the road was a challenge for me. I wanted to stop and smell the flowers. I continued riding and soon we reached a path that seem to lead into the forest. I was told to wait. Waited I did for my “buddy” rider.

The ride began. Up I went. It was rather unusual for me the first 15 minutes, as being a hiker I generally look around the surroundings, take my time to enjoy the view. However, I realized that riding on the bicycle I lost such luxury. I was tensed up with the bicycle, the 10K worth of metal frame. I held onto the handlebar as if my life depended on it. So much so, till I reached a cliff, it dawned upon me that my life indeed is dependent on the wheels. I felt fear, I tasted fear when I saw the cliff. The sensation was indescribable. Without much hesitation, I turned to my “buddy rider” and said, “ My hospital card is in my wallet. Will you die if you fall into that cliff? “ Sarcastically, he replied “You won’t die. You just break a few bones”. Faintly, I heard my heart stopped for a moment. We arrived at “steroid hill”. I was given two options, to ride up the hill like a man or take the easy path around the hill. Give up without trying ? I buckled up my courage along with my womanly manly ego and said “I am riding up ! “ Admittedly, I was dying in pain and agony. The half an hour ride up the hill earlier must have busted my labia. I figured if its gonna hurt, I might as well die in glory. A dignified death.

I rode up hard.Willfully with each paddle, I found strength to do yet another yank. Halfway, I collapsed and I stopped for air. As I inhale the fresh air, I felt numb down under. I was immune to the pain. My feet took charged and I continued paddling. The adrenaline was rushing up, I was panting and gasping. Not realizing it, I was probably moaning in ecstasy. Finally, I climaxed and reached the top of the hill. I cycled up steroid hill, my first attempt and I survived.

That was just the tip of the iceberg. Cycling down hill triggered yet another emotion. I learnt how to lift my butt high, this is so I can save my generations after. Bumping one stone after another, the bike flew up in the air. 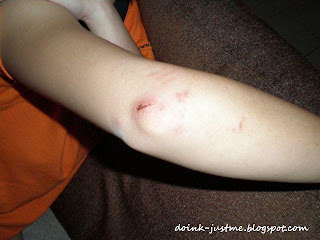 Abrasion from the fall

Whilst in the air, I saw another cliff and I panicked. The bike went down on a big stone, I was clutching to the handle for my dear life and crashed … I hit the ground. The bike flung aside and I was seated on my buttocks. Looking at the 10K worth of metal piece, I realized something very valuable. At times of emergency, you naturally forsaken even the most precious belonging to save yourself. Human instinct for survival. I sat on the ground and my elbow started bleeding, the nerves in my knees find its way to the spine, filling my body with a sharp unpleasant sensation. The soreness gave me meaning to my life. How I appreciated the fall, I didn’t break any bones. I am thankful. My “babysitter” waited for me to regain my composure and then prompted me, “Are you OK?”. I looked up at him and I just smiled.

The journey up and down the hill was a learning experience, one that is tiring but yet enjoyable. Reaching the tar road, I felt the wind gushed against my face. Flying free somewhat. Upon arriving at the cafe, I sat next to a female biker. In complete exasperation, I asked her “Is this suppose to hurt that bad ?” Shyly, she nodded and added “Wearing the right pants should soften the impact and riding a girl’s bike has better cushion”. With much sympathy, she gave me a pat on my shoulder. Another sympathetic male rider shared his empathy as he parts his wife’s riding experience with me. Now, I truly understand why this sport does not entice females. 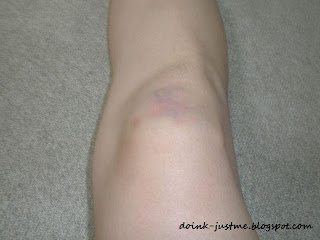 bruising on both knees after fall
Will I have a second time in mountain biking ? To be honest, I’m not sure. I just have to wait and see. Till next time, I think I should allow some time for recovery. My first time, I never expect for it to hurt …that bad.

Kenong Walk All In One

The Art of Wrapping