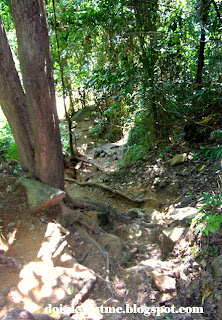 The Road not taken – by Robert Frost
Two roads diverged in a yellow wood
and sorry I could not travel both
And be one traveller, long I stood
and looked down one as far as I could
to where it bent in the undergrowth;
Those were the words that linger on my mind for the past one year. I still reminisce December year 2005 where I took the courage to quit my job and venture into my own independence earning. I am often reminded of my decision when I go trekking in the woods. I am very fortunate to be able to walk the jungle with some good friends and strangers from Raleigh International Kuala Lumpur every now and then.
Each step, each footprint up the trek, I build courage in life. The picture above was the most difficult hike I’ve taken but yet the sweetest. The climb up was steep and rocky. 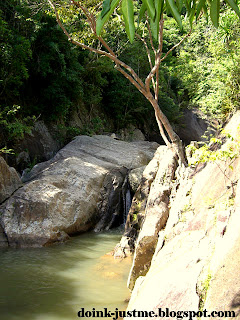 The fruit was barely commendable. A 2 hour hike up the hills in Koh Samui jungle, reaching the destination to an almost dried up Na Muang No2 waterfall. The water was not even clear. It was murky. 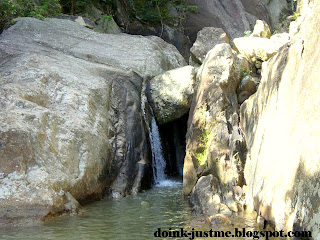 The attraction of this waterfall is the hidden cave beneath the waterfall. One can swim and enjoy the splashing effect of H2O. It is an interesting experience for those who have not gone caving or seen a waterfall.

But, why has it been the sweetest experience for me ? It was the journey, not the destination. In fact, I was very disappointed with what I saw at the end of the trek. I was however, smiling throughout the trek.

The guide brought light to my face, despite my burning toes. The middle aged Thai guide held my hands at every corner, at every curve up the steep steps. My trekking companion was obviously not very happy that he had no share of the hand holding, for he too paid his share of RM30 to the guide. Midway of the trek, the guide gave us a role playing adventure. I was Jane and my companion was Tarzan for a good 30 seconds. We swung on vines. It was fun, I mean FUN. I felt like a 6 years old.

After the swim in the waterfall, I was in obvious disappointment on my trek down. The dark man did something unexpectedly. He walked down a very, very dangerous cliff, bend downwards …it was as if he was getting ready to jump off the cliff, then he came back up with something on his hands. He plucked a wild flower off the edge of the cliff for me. I was speechless. Utterly speechless. What do you say to a man whom you know for 2 hours, one who could barely understands a sentence you’ve said as a gesture of gratitude? I smiled. That’s all I did. I was treated with respect from a man who probably couldn’t remember my name.

The journey was all worthwhile to me. There is still hope in man.